You are here Home > Brinsop Court announces its latest success 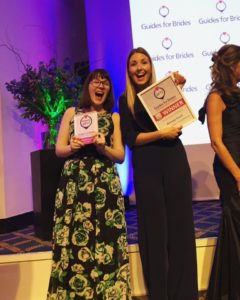 Three members of the Brinsop Court team attended the Guides For Brides Customer Service Awards 2017. Joining a sold out awards night with 250 guests at No 4 Hamilton Place in London on Thursday 9th March, the team and various other wedding industry businesses spent the evening networking, before sitting down for the all-important ceremony.

Brinsop Court was nominated and later shortlisted for Best Stately Home/Mansion, with 125 entries, this was a tough category to be in.  The awards were processed and final judging was carried out by wedding review expert Alan Berg who is based in the USA to ensure the results, the expert took into account reviews from past guests and the work the venues had undertaken within the last year. As the Presenter read out the 10 short-listed venues, highlighting that there was fierce competition this year across Oxfordshire, tension and silence fell across the room- it was announced the winner had been described as ‘magical’, and ‘a hidden gem’ and despite the competition in Oxfordshire, Brinsop Court had won!

There were 17 categories in total for all types of businesses from the wedding industry. Brinsop Court is reasonably new to the wedding industry asan exclusive-use venue, but the venue are thrilled to have accepted this award on behalf of everyone at Brinsop who tirelessly puts efforts in to make Brinsop so special.

Brinsop court is an award winning 5* moated manor house nestled in the rolling hills of Herefordshire just outside of Tillington.  An exclusive use self-catering accommodation, Brinsop Court is an idyllic venue for weddings, holidays or corporate stays.