You are here Home > Celebrating the Feast of St Nicholas

Celebrating the Feast of St Nicholas

We often wonder where some of our customs and traditions originate from. However some fade away over the centuries but others have survived the test of time. One such tradition which is thought to have originated in the 13th century, was upheld in Hereford Cathedral until very recently. Celebrating the Feast of St Nicholas and choosing a ‘Boy Bishop’ was commonplace during medieval and Tudor times.

Who was St Nicholas?

Traditionally a choirboy would be chosen on the 6th December, (the feast of St Nicholas, the patron saint of children, as well as sailors, merchants, archers, repentant thieves, brewers, pawnbrokers and students) to take over the duties of the Bishop.

The ‘Boy Bishop’ would be invested with all of the symbols of the episcopal office and be seated in the Bishop’s throne. He was required to act as Bishop for anywhere between 24 hours and 3 weeks depending on the region. Required to preach at least one sermon, he lead processions around communities, collected money for the parish funds and had the authority to bless people. He was also given a supply of tokens to distribute to the poor which could be redeemed for food and drink in local shops and hostelries.

It was believed that the ‘Boy Bishop’ tradition was a reinforcement of beliefs of the special relationship of children with heaven and a respect for innocence and purity of soul.

Why did Henry VIII ban the Boy Bishop?

King Henry VIII banned the appointment of ‘Boy Bishops’ during his reign because he felt it was unfitting and mocked Church authorities and in turn the king himself. However it was briefly reinstated by Mary I and then disappeared again under Elizabeth I’s reign.

What was ‘barring out?”

Another Tudor tradition associated with St Nicholas’s Day is that of “barring out”. Schoolboys would lock their schoolmasters out of the school and take possession of the place until the schoolmaster met certain demands. We could definitely see that going down a storm in our local schools today!

We have some brilliant customs and traditions in our county, some well-known and others well hidden. So if you have any to share and keep alive please do we would love to hear from you. 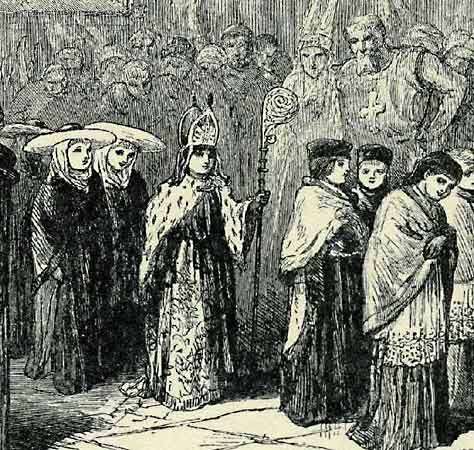