The skies cleared, the sun shone and the breeze blew just enough to create the perfect weather for our wonderful Hereford Experience Day on 15 August, where we brought together tourism businesses to see the City sights of Hereford that they might often overlook.

As part of our series of Member Experience Days, the aim is to remind tourism providers of what is in their local area so that they can themselves inspire visitors to visit Herefordshire and enjoy all it has to offer once they are here.

Meeting the Mayor and the Civic Treasures of the Town Hall
Attended predominantly by Accommodation providers, and open to Members and Non-Members of ESL, the day began with tea and biscuits with the Mayor of the City of Hereford, Kath Hey, in the Mayor’s Parlour.  We learned about her plans and projects for the mayoral year ahead along with her chosen charities Phoenix Bereavement and the CLD Trust, both supporting children’s issues. 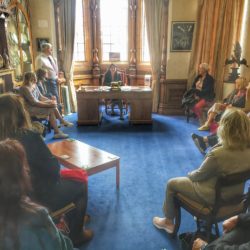 Tea in the Mayor’s Parlour 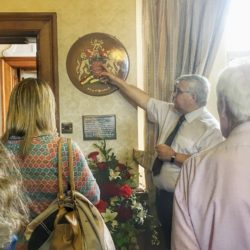 The Hereford City Coat of Arms 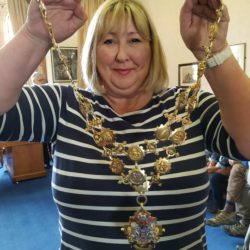 The Mayoral Chain of Office

Ably assisted by the Mayor’s Officer John Marshall, we were then given a most fascinating tour and talk around the historic treasures of the Mayor’s Parlour, which all derive from Hereford’s history as the second oldest City in the UK and its high importance in the country.The special new Civic Museum, showcasing many more of the City’s treasures including Militaria, silverware, the City’s charter and more is open for the public to view most days during the Town Hall opening hours. 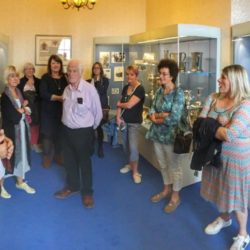 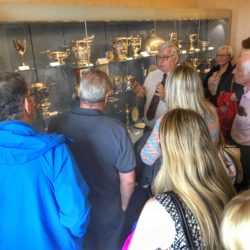 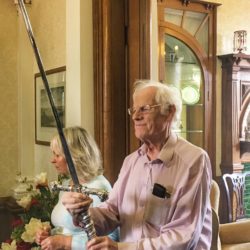 Learn more about the Mayor and how to see the civic treaures of Hereford City here and look out for news of the Town Hall’s and Museum’s Open Day on 12 October 2019.

Hereford City walking tour
Next followed a walking taster-tour of the City, led by the Guild of Guides. Living and lost landmarks and the wider history of the City were revealed through Linda’s expert knowledge. More comprehensive guided walks are available every day from Easter to end of October, starting at Hereford Cathedral. Look online at the Hereford Guided Walks website for more more details. 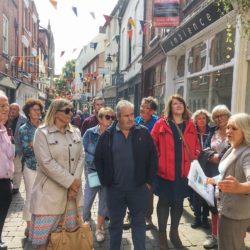 The history of Church Street 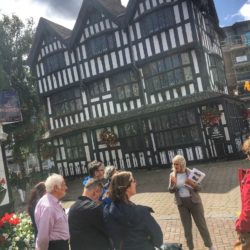 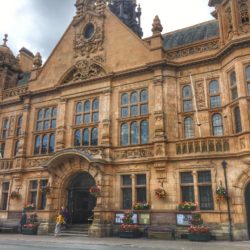 Hereford Cathedral Gardens
After a brief lunch break, we reconvened at Hereford Cathedral for our next immersive tour of the Cathedral Gardens. The six acres of terraced lawns, beds and ancient trees stretches right down to the River Wye and includes the Cloisters garden, which was traditionally planted with apothocary plants for healing purposes. Our learned guide was able to tell us an enchanting history of the gardens as well as the plants, their uses and planting properties. 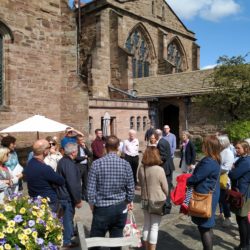 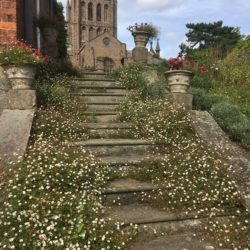 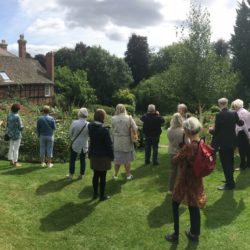 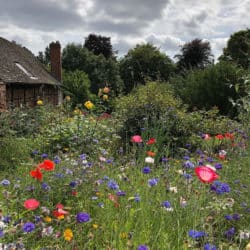 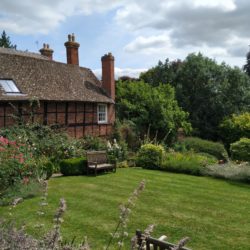 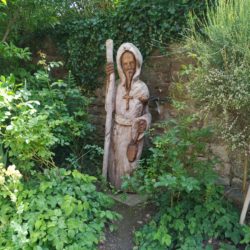 The Green Dragon Hotel
Our final destination was to the newly refurbished Green Dragon Hotel. Having undergone an extensive cosmetic revamp, the group was treated to a behind-the-scenes tour of the rooms, lounge, ballroom and sneak peak at spectacular new-look restaurant The Hereford, still in its final stages of decoration before its official launch on 1 September 2019. Director, Christian Dangerfield, hosted with tales of this historic building, which is one of the 5 oldest hotels in the country and which aims to resurrect its presence as a hub for Herefordshire’s city and county life, celebrating the region’s food and social provenance. The day ended with a delicious cream tea (and Prosecco option) in the Green Dragon’s Offa Bar; the sleek new cocktail venue open to public and residents alike. 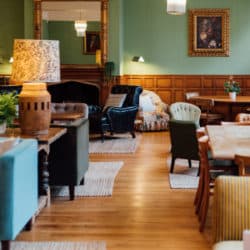 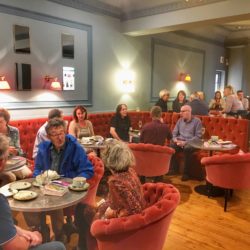 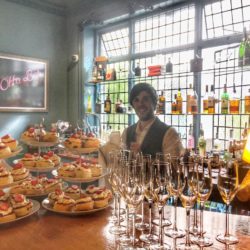 ESL would like to say a very special thank you to the above venues who’s time, commitment and welcome made this experience day so outstanding for those attending.

It is ESL’s mission to bring the tourism community together more and more and, following the success of this Hereford City and the previous Ross-on-Wye Experience Day, we will continue to plan events like this in different parts of the county. ESL is not publically funded, and it is the contributions of our loyal Member businesses that enables us to facilitate these types of experiences to the benefit of the wider tourism economy. If you would like your business to become an Member, please contact us on info@eatsleepliveherefordshire.co.uk T: 07713 243869 and also see the Membership benefts here