You are here Home > ESL in National Awards Finals 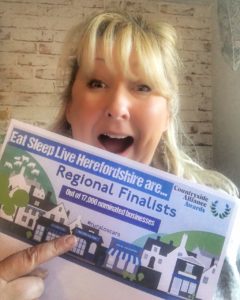 Eat Sleep Live Herefordshire could not be more thrilled to be shortlisted as finalists in the national Countryside Alliance Awards, known as the Rural Oscars.

The Awards are the Countryside Alliance’s annual celebration of British food & farming, enterprise and heritage through the nation’s small hard-working businesses. The awards are now in their fourteenth year and have become the definitive rural business award to win. They are set apart from other award schemes because they are driven by public nomination, offering customers the chance to say why their favourite businesses are worthy of national acclaim. The awards received over 17,000 nominations this year so Eat Sleep Live Herefordshire is extremely proud to be shortlisted in the category of Best Rural Enterprise.

Eat Sleep Live Herefordshire (ESL) launched in 2016 to provide the destination marketing service for Herefordshire in the decline of the local authority provision.

Entirely self-funded, with no public funding support, the team promotes the amazing places to eat, sleep and enjoy to not just a local audience, but regionally, nationally and internationally to develop the county’s essential visitor economy.

“To be recognised and nominated like this by the public is incredibly motivating for our small passionate team” said ESL Managing Director and Founder Heidi Chamberlain-Jones. “Herefordshire is an amazing county and is so dependent on the tourism and leisure pound, as well as that sector for employment. We’re proud to showcase it and hope that even being Finalists will help to raise awareness of the area.”

Regional judging visits of the Finalists will now commence between March and May, for assessment on criteria such as

English regional champions will be announced in May, propelling them to the Grand Final to be held at The Houses of Parliament in June 2019.

Overall champions are chosen by a judging panel which includes Michael Gove the Secretary of State for Environment Food and Rural Affairs, Waitrose Food Editor and Masterchef judge, William Sitwell, Philip Johnston, Assistant Editor of the Daily Telegraph, Emma Penny of Farmers Guardian, Peter Gott of Sillfield Farm (and founder of Borough Market), Clarissa Dickson Wright’s friend Sally Merison, Baroness Mallalieu and Tim Bonner, CEO of the Countryside Alliance, and the awards culminate with a Champions’ Reception at the House of Lords.