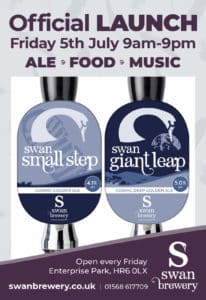 Made from Hops named Apollo, Eagle, Comet and Flyer they have great aroma and flavour profiles and line up perfectly for beers to celebrate the Apollo 11 mission.  Named Swan Small Step and Swan Giant Leap the pump clips for show a moon-boot print and earth viewed from the moon and should help sales go like a rocket.  At 4.1% and 5.0% these cosmic ales will be out of this world.

The beers on draught will be launched at a Tasting Day on 5th July 9am to 9pm at the brewery.  A limited-edition Swan Giant Leap 5% bottled ale is already available in the brewery shop and local retailers

FREE ENTRY
Over 18s only
Free
What's On
Sign up to our newsletter and discover new events delivered straight to your inbox!
Tweet