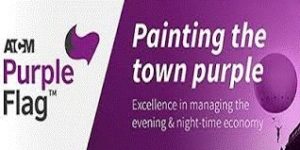 Hereford Secures Purple Flag Status, for its evening and night-time economy. Purple Flag is a town and city centre award – similar to the Blue Flag for beaches.

Hereford Mayor, Councillor Sharon Michael, is delighted by the award, “We have something very special going on in Hereford’s Night Time Economy. So many people work so hard to make Hereford a great place to have a good night out. It’s great for everyone’s efforts to promote a fun yet safe night time environment is recognised.”

John Jones, Chair of Hereford’s Business Improvement District, says: “This great achievement puts Hereford among only 70 cities that have achieved Purple Flag status. The award is not just about safety, but also the vibrancy and diversity of Hereford’s evening and night-time offer. This is yet another indication that the city is headed in the right direction.”

Herefordshire Cabinet Member for economy and corporate services, Councillor David Harlow, said, “This is a great example of Hereford people coming together to achieve something very special for the city.”

Comment made to the Purple Flag Assessment Team:  “It’s a very Hereford thing how everybody looks out for one another.”