You’ve probably gathered that Herefordshire is big on food and drink and we have some great Herefordshire Food Heroes. It’s natural, considering our agricultural heritage and rich farmland. But you might not know about some of the big and the up and coming names that started their roots (pun intended) in this very county. 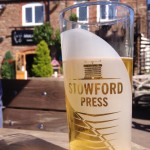 Bulmers, that giant of cider makers, originated here and still has a heritage, not to mention many family members. While its factory may now be renamed following the inevitable buy-outs, Strongbow’s origins are firmly in Herefordshire and always will be, and the popular Cider Museum operates on the original factory site.

Tyrrells crisps were developed in Herefordshire by a local potato farmer William Chase and it is still the home of the brand, using locally grown spuds. Following a sell-out, William then went on to create Chase Vodka, now including a gin range, still using his own potatoes and still staying in his home county.  He’s making a return to snacking so look out for his new popcorn range ‘Fit Corn’ too!

Originally farmers and still so, Westons are following Bulmers for well known brands like Stowfords Press, produced from their Much Marcle plant. And prolific beer makers Wye Valley Brewery has grown from a micro-brewery in a pub to being a stalwart of the industry, now with several ale houses and a large brewery at Stoke Lacy servicing the region.

Have you spotted the Wye Valley asparagus from Marks & Spencer and other fine food purveyors? Yes, that’s ours too, by the Chinn family. Look out for S&A Group’s mark on your supermarket strawberries, those are Herefordshire’s juiciest. And of course we couldn’t forget our staple export, Hereford beef; there’s none better.

Let us know what other Herefordshire Food Heroes you discover.  It’s getting more like HereFOODshire every day!