The iconic poppy sculpture Weeping Window by artist Paul Cummins and designer Tom Piper will open today, Wednesday 14 March, at Hereford Cathedral.  The work will be on site until 29 April 2018 as part of the final year of 14-18 NOW’s UK-wide tour of the poppies.

The presentations by 14-18 NOW, the UK’s arts programme for the First World War centenary, give people across the UK the chance to experience the impact of the ceramic poppy sculptures in a range of places of particular First World War resonance. The sculptures have already been displayed in 13 locations since the tour started in 2015, and viewed by over 3.5 million people to date. At the end of the tour they will become part of the Imperial War Museums’ collection. 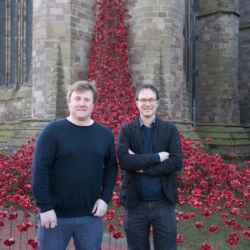 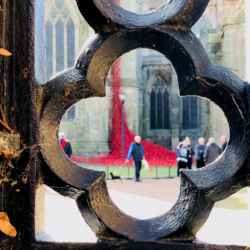 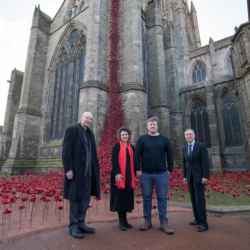 The men and women of Herefordshire made a huge contribution to the war effort, from the brave young men recruited into the Herefordshire Regiment – among them Allan Leonard Lewis who was awarded the Victoria Cross – to the Canary Girls who filled munition shells at the Rotherwas Munitions Factory. Local farmers provided food for the country and the Front, as well as horses for the movement of soldiers and supplies.

“We are delighted to work with Hereford Cathedral to welcome the iconic poppy sculpture, Weeping Window to Herefordshire. We are expecting up to 2,000 visitors a day to come and see the artwork over the next few weeks, explore the cathedral and the city. As a proud military county, it is an honour to be able to mark the sacrifices made by those during the First World War.”

The Dean of Hereford said:

“It is an enormous privilege for us at Hereford Cathedral to be the first venue in this final year of the 14-18 NOW tour to host Poppies: Weeping Window. As expected, it looks stunning, with the poppies cascading down the staircase turret of our north transept. We know Weeping Window will be a poignant and inspiring focus for prayer and reflection over the next seven weeks for many people from across our city and county and far beyond. We are immensely grateful to all those who have helped to bring this very special work of art to Hereford. We look forward to welcoming the visitors who will come to see it.”

“The poppies have captivated millions of people across the UK, and we are delighted to present Weeping Window at Hereford Cathedral as part of the ongoing tour. We are so grateful to artist Paul Cummins and designer Tom Piper for these two enormously powerful artworks of national significance that continue to inspire all who see them.”

Weeping Window is from the installation ‘Blood Swept Lands and Seas of Red’ – poppies and original concept by artist Paul Cummins and installation designed by Tom Piper – by Paul Cummins Ceramics Limited in conjunction with Historic Royal Palaces. The installation was originally at HM Tower of London from August to November 2014 where 888,246 poppies were displayed, one for every British or Colonial life lost at the Front during the First World War. Together, the sculptures Wave and Weeping Window are made of over 11,000 poppies.

The tour has been made possible by the Department for Digital, Culture, Media and Sport (DCMS), the Backstage Trust, the Clore Duffield Foundation and the National Lottery. DAF Trucks are the transport sponsor for the UK presentations, and 14-18 NOW are delighted to partner with DAF on making this historic project a reality. The learning and engagement programme for the poppies tour is supported by the Foyle Foundation. Storage of the sculptures is generously provided by MTEC.

Paul Cummins
Paul Cummins MBE is a ceramic artist, internationally renowned for the installation ‘Blood Swept Lands and Seas of Red’ at HRP Tower of London 2014, as well as many other installations including his work on the Cultural Olympiad in 2012. Locations for previous works include the Houses of Parliament, Chatsworth House, Althorp Estate and Blenheim Palace. Paul was inspired to produce a ceramic poppy to honour every British or Colonial life lost at the Front during the First World War.

Tom Piper
Tom Piper MBE was Associate Designer for the Royal Shakespeare Company from 2004 to 2014, and was closely involved in the redevelopment of the Royal Shakespeare Theatre. His theatre credits include over 30 productions for the RSC, including the award-winning History series. Other recent designs include Hamlet, King Lear (Citizens Theatre), Red Velvet (Tricycle Theatre and St Ann’s Warehouse, Brooklyn), Tamburlaine (TFANA New York), Pride and Prejudice (Regent’s Park Theatre), The King’s Speech (Birmingham Rep and Tour) and Zorro the Musical (West End and world tour). Piper’s opera credits include Macbeth and Falstaff (Scottish Opera), Orfeo (ROH and Roundhouse). Tom collaborated with the British Museum and Alan Farlie Architects on the exhibition Shakespeare: Staging the World in 2012 as part of the Cultural Olympiad. Tom is a Creative Associate at the Tricycle Theatre. His many awards include an Olivier Award (costume design) for the Histories series.

14 -18 NOW
14-18 NOW is a programme of extraordinary arts experiences connecting people with the First World War, as part of the UK’s official centenary commemorations. It commissions new work by leading contemporary artists across all art forms; the programme has included over 200 artists from 35 countries, with commissions taking place in 160 locations across the UK. Over 30 million people have experienced a project so far, including 7.5 million children and young people. 16.7million people took part in LIGHTS OUT in 2014, and 63% of the population were aware of Jeremy Deller’s 2016 work ‘We’re here because we’re here’. The UK tour of the iconic poppy sculptures by artist Paul Cummins and designer Tom Piper have been seen by over 3.5 million people to date.  14-18 NOW has won many awards for its work, including the National Lottery Heritage Award 2017, a Museums Heritage Award and the Chairman’s Awards at The Drum Social Buzz Awards 2016.  It is supported by the National Lottery through the Heritage Lottery Fund and Arts Council England, by the Department for Digital, Culture, Media and Sport, and by additional fundraising.

Hereford Cathedral
Hereford Cathedral dates from 1120 and is renowned for being the home of the Mappa Mundi, the Magna Carta from 1217 and a unique Chained Library.  World War One memorials in the cathedral include a plaque commemorating the men of all ranks of the Herefordshire Regiment who died on campaigns in Egypt, Gallipoli, Palestine and France and plaques for the cathedral choristers who fought in the war and those who died during or after the war from their injuries. A Book of Remembrance for the husbands and son of members of the Hereford Mothers’ Union who gave their lives in the war is on permanent display. In 2018, Hereford Cathedral will install a memorial stone honouring soldier Allan Leonard Lewis, the only Herefordshire born recipient of the Victoria Cross, who was killed in September 1918 aged 23.  The Victoria Cross was presented to his parents by His Majesty King George V at Buckingham Palace in April 1919.