Malvern and its hills really are a special destination and are known for several key reasons; the Malvern Hills for their incredible views and walking, for their springs, fountains and natural water, and the Malvern area for its independent schools, theatre and active showground. The Malvern Hills are a 15km (c.9 mile) range of ancient pre-Cambrian age; at least 650 million years old. Their composition on the ridge top supports little more than short wiry grasses, providing ideal walking conditions and stunning views, earning their stripes as an area of outstanding natural beauty and it is also a Site of Special Scientific Interest. They divide the counties of Herefordshire and Worcestershire with the rolling countryside of Herefordshire to the west and the flatter plains of the Severn Valley to the east. 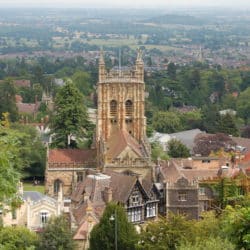 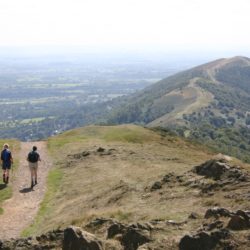 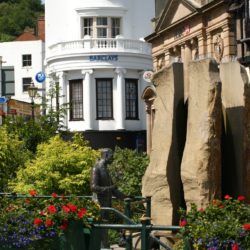 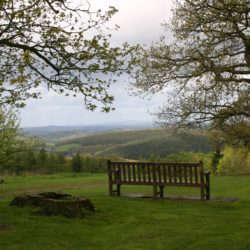 The highest point on the Hills is the Worcestershire Beacon at 425m, with North Hill 397m, and the British Camp Hill or Herefordshire Beacon at 338m the other highest points. Twenty named hills complete range and the entire length of the Hills are open to the public, woven with about 160km/100 miles of bridleways and footpaths and are very dog friendly, though cycling is allowed on bridleways only. There are lots of walks with outstanding views over Herefordshire and Worcestershire. It is from these hills that the many (c. 88) springs and fountains flow from outlets all around them. This is of course were the famous Malvern spring and mineral water derives. While the town and its pretty beamed buildings are well serviced, one of the main attractions is the Malvern Theatre and also the Three Counties Showground. The theatre hosts great productions and is part of the celebrity circuit for performances, continuing Malvern’s reputation for inspiring our cultural arts heroes like Elgar, Tolkein and more modern day Phil Rickman, to name but few. The Three Counties Showground welcomes a huge annual footflow for long established and nationally acclaimed events like the Royal Three Counties Show, RHS Malvern Spring Fair, the Malvern Autumn Show and many many more. Whatever the reason for your visit, be it a show, an event, the walking and activities, Malvern is a year round destination. Please visit Malvern Tourist information website for any further information. With thanks to Malvern Hills District Council for their wonderful photographs

Escape to the Clock Tower at Barton Court in Colwall for a break away and lose yourselves for a few days exploring the beauty of the Herefordshire countryside. 1 Bedroom Sleeps 2 Dog friendly Private garden Private Hot Tub The Clock Tower is a romantic little bolt hole, perfect for some time away together with its very own wood fired hot tub. Once the head gardener’s cottage, this bijou little house has been carefully restored to make it as comfortable as it is charming. It has everything a couple and their dog could need; a cosy sitting room with a log burner, a comfortable bedroom with lovely views, a well equipped kitchen and a good shower room. There is even a second loo, an enclosed dog run and a little patio area. There is a pretty little enclosed garden in two sections, one with an area where you can sit and have a coffee and another with its own hot tub where you can relax and gaze at the Malvern Hills and the stars. Also see Barton Court, Barton Court Wedding Venue & Barton Court Corporate Venue

Barton Court, Colwall, WR13 6HN between Ledbury and Malvern, surrounded by glorious countryside is the perfect location for any corporate or business activity. At the rear of the main house and formed from the outbuildings that surround the 13th century dovecote is a period courtyard complex of the newly refurbished buildings. The Engine Room and Loose Box are now available for hire. The Saw Mill and Dutch Barn will be ready later in the year. The Engine Room is a light filled, white painted space, 15 metres by4.5, with lovely views over the glorious countryside. It is suitable for any number of uses from workshops, conferences, presentations, meetings to dinners and children’s parties.  It has plentiful toilet facilities adjacent and can be taken with a catering kitchen for an additional charge. The Loose Box, once the Georgian stables, now functions as the bar and bistro serving locally sourced and made produce showcasing the best that Herefordshire has to offer in quirky, interesting surroundings.  Small, informal meetings work well in this space. The  splendid main house is also available to rent on an ad hoc basis for launches, meetings and corporate events.  An exquisite example of 18th century architecture, it is […]

Barton Court near Colwall need a talented and innovative chef to create and build up a food business at Barton Court from scratch. Initially part time, full time as quickly as possible. Salary to be discussed but the right candidate will get profit sharing. Candidate will need a clean driving license To apply Email Linda Camp with a CV in the first instance: linda@bartoncourtonline.co.uk

Barton Court, Colwall, is a period country house on the edge of a charming village, in its own  grounds, surrounded by spectacular countryside. Between the two very different vibrant towns of Malvern and Ledbury, it is private but not isolated.  The station one mile away has direct connections with London, Bristol and Birmingham and the motorway network is only 3 miles away, making it easy for people from all over the country to travel to. The house is Georgian, beautifully preserved and filled with period features, which has undergone a sensitive refurbishment programme to introduce – discretely – modern facilities and creature comforts while enhancing all of its historic charm. It sleeps up to 24 in 10 bedrooms in the main house with 9 bathrooms [8 ensuite].  The drawing room is dominated by a remarkable 250 year old plasterwork ceiling and floor to ceiling windows that look south over the hills.  There is a formal dining room and a library plus 6 acres of grounds to enjoy exploring.  For larger parties, the annexe wing, now renovated, can be opened up to accommodate an additional 8 or 10 guests As well as the main house, The Clock Tower has been given […]