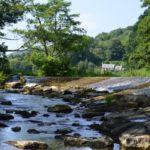 In north-western Herefordshire, close to the Shropshire Hills AONB and the Radnor Hills of the Welsh Marches, is a deeply rural area with breathtaking countryside, rolling hills, ancient woods, forests and water meadows. The rivers, Teme (a SSSI), Clun and Lugg, are prominent features of the landscape. This is a land of political history and intrigue, dominated by the rich estates, offices of power and profit bestowed upon the Mortimer Marcher Lords of Wigmore, Harleys of Brampton Bryan and Crofts of Croft Castle. Some of the place names of our picturesque villages and hamlets are lost in the mists of time. Some were thriving medieval townships with bustling markets, minstrels, traders and medieval malarkey. Such a place was Wigmore, to be found nestling under the imposing castle and church. Wigmore Basin, once a glacial lake, can be seen from Wigmore Castle. To the left of the basin Wigmore Abbey and the spire of Downton church can be glimpsed. Surrounding the basin are the villages of Leinthall Starkes, Elton, Pipe Aston and Burrington, all easily explored by bike. The hills in the far distance are Mortimer Forest and Bringewood Chase: beyond is Ludlow. Rising behind the villages of Lingen, Aymestrey and Adforton are ancient woods and meadows, green lanes and the tiny hamlets with evocative sounding names – Lye, Deerfold, Cruckmullen and Cross of the Tree. From Lingen and Combe the hills rise into Wales and Offa’s Dyke. When the days lengthen a profusion of wood anemones, bluebells and ramsons (wild garlic) are to be found on woodland walks; pied flycatchers, redstarts, and the cuckoos return. As in medieval times, the woods and forests are the habitat of elusive deer. Butterflies and moths are seen in abundance along byways and woodland glades and overhead, red kite. Brampton Bryan is a small village with black and white cottages set around the village green. An ancient yew hedge surrounds the hall and ruined castle. A little upstream, across the River Teme, set in the Shropshire Hills AONB is Bucknell, with a railway halt for the Heart of Wales Line. Leintwardine, set on the confluence of the rivers Teme and Clun and once a Roman trading post, still bustles with the life of a vibrant rural community. It offers a choice of places to eat and the taste of real ales, ciders and perries. Sitting very quietly beside one of the rivers it is not unusual to see dipper, kingfisher, sand martins, goosander and little egret. At the right time of the day and year you might spot otters. Walking the Teme upstream to Walford and Buckton and the Clun to Clungunford you may see osprey and marsh harrier, following the rivers on their spring and autumn migratory routes. After crossing the River Lugg at Aymestrey (surrounded by limestone features rich in fossils), there is Shobdon, with its ‘Strawberry Hill’ Gothick church, set in stunning parkland, and Kingsland. Both are thriving villages. Croft Castle and Croft Ambrey Iron Age Fort, parkland and estate have glorious views into Wales, Shropshire and Herefordshire. From Croft the Mortimer Trail leads east to Richards Castle and Ludlow. From early summer to late autumn, festivals, village fetes and celebratory events flourish. Find more information on the area and things to do such as Cycling, Walking, Fishing, Horse Riding and Local Attractions on leominstertourism.co.uk/mortimercountry

THIS JOB HAS EXPIRED Job Title: General Assistant at The Riverside Inn, Aymestry This post is permanent  and can be full time or part time. Experience is desirable but not essential as full training will be given. If you are looking to work in the hospitality business, have great customer service, a keen eye for detail and just enjoy the industry – please give Andy a call on 01568 708440 or email him on andy@riversideaymestrey.co.uk. The Riverside at Aymestrey – winner of Visit England ‘Best Tourism Pub 2018’ –  is situated deep in the heart of Herefordshire countryside just on the southern edge of the Mortimer Forest, yet still close to Ludlow and Hereford. Authentic and atmospheric, the 16th century black and white building is surrounded by the natural beauty of the River Lugg valley.

General Assistant at The Riverside Inn

The Riverside Inn’s pretty black and white premises has it all Set in the picturesque village of Aymestrey, near the Herefordshire/Shropshire border, The Riverside Inn has an award-winning restaurant, wonderful walks, a nature-lovers haven and well-appointed rooms. Food at The Riverside is made and cooked freshly on site; from the garden honey, oat and yogurt soda bread to the delectable lemon verbena ice cream. Sustainability and ethical sourcing is important to us for mussels and sea fish. Always scoring well regarding food miles for British produce and Fair Trade sources for imports. The kitchen garden is an important ingredient in the creation of menus and Andy and his team prepare the ground, sow and reap the seasonal vegetables and fruits. There are designated “dog tables” in the bar should you wish to take your four-legged friend to dine with you. The river and its banks are full of wildlife; dragonflies, dippers, otters, kingfishers, brown trout and grayling all live here. Fly fishing is available for guests on a 1½ mile beat upstream from the Inn. Also see Accommodation at The Riverside Inn

Country Inn Mortimer Country
Find out more
We use cookies to help us improve this website. If you continue to use this site we assume that you are happy for us to do so. Find out moreAgree