You are here Home > The Hay Poisoner

Our tale this week is all about rivalry, disputes and petty greed that led to the only solicitor in the United Kingdom to ever be hanged for murder and known as The Hay Poisoner. Major Herbert Rowse Armstrong practised in Broad Street Hay on Wye at ‘Cheese and Armstrong’ and he and his wife Kitty were seemingly upstanding members of the community. The Major a prominent Freemason was much respected. He had fought in the First World War and now resided in Cusop Dingle with his family. On the surface his marriage seemed fine. However Kitty was publicly vocal about her disappointment with her husband and didn’t mind who knew.

During 1919 Kitty fell ill with a stomach complaint, experiencing a variety of symptoms from vomiting to paralysis to delusions. She was admitted to Barnwood Gloucester’s mental asylum after showing signs of mental collapse. Within weeks though she started to make a recovery. However when she was released in January 1921 and returned home she fell seriously ill again. Subsequently she died within a month, with the Major there by her side. Kitty was buried and no-one thought any more of it.

It would appear that the Major had a few enemies and rivals in Hay, one of which was Oswald Martin. The two had been in dispute about an estate which was likely to cost the Major a lot of money. In a bid to resolve matters the Major invited Oswald to tea where he served buttered scones. Strangely though during the meeting they never discussed their dispute. Within hours Oswald was violently sick, his father in law one John Davies the local chemist tended to him. Davies was perturbed by the symptoms which were very similar to those of arsenic poisoning. A perceptive man, Davies recalled the Major purchasing arsenic from him for the purpose of dealing with a dandelion problem in his garden and became immediately suspicious.

Oswald and his family returned to normal as he made his recovery. That was until a box of chocolates were delivered to his home. With no card or trace of who they were from his sister in law Dorothy fell ill after eating one. John Davies became suspicious again and contacted the Home Office where he sent the chocolates to be examined. They were found to contain arsenic. A small needle hole had been detected at the base of each chocolate through which arsenic had been inserted.

This turn of events led to Kitty’s body being exhumed and examined and as suspected a high level of arsenic was found. The Major was arrested in December 1921 but pleaded not guilty. Gossip was rife. Many talked about another of the Major’s rivals William Davies a local estate agent who had died unexpectedly after being in dispute with the Major. How many more victims were there?

The Major was brought to trial in April 1922 where he strenuously argued that Kitty had committed suicide. However medical evidence proved that Kitty had been completely paralysed in the days before her death. He also couldn’t account for why he had arsenic in his possession when he was arrested.The Hay Poisoner was found guilty by the jury and was hung in Gloucester jail in May 1922.

Much later, after the trial, two possible motives emerged for Kitty’s poisoning. Firstly, the Major had decided he wanted a different, more congenial wife. Secondly, Kitty had written a will in 1917 leaving the bulk of her estate not to her husband, but to their children. The Major produced a new will following his wife’s death, giving him control of her estate, but studies suggest that it was probably forged. 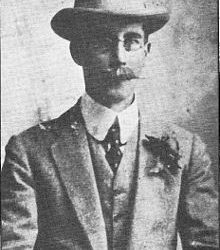 Walter Scott’s poem “O, what a tangled web we weave when first we practise to deceive!” sums up this sad tale. Often, one lie leads to more. Similar to how a spider weaves a web, and as the lies multiply, the web becomes more and more tangled. And we become trapped in the dishonesty.

This was certainly the case for Major Herbert Rowse Armstrong, The Hay Poisoner.

A mini TV series called ‘The Dandelion Dead‘ was made in 1994 based on this true story.

Click here to return to our Herefordshire History and Folklore page for more great stories.